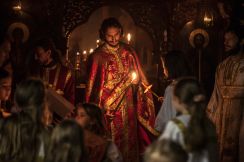 Vesselina Velcheva won the big prize in the competition "The Colors of Orthodoxy. Bulgaria"

On the 30th of August the winners of the photo competition at the orthodox photography site Orthophoto “The Colors of Orthodoxy. Bulgaria“ were announced at Book-atelier "Bird House" organized in partnership with the The Pokrov Foundation and the Publishing House of the Polish Orthodox Church.
Alexander Wasyluk, editor-in-chief and coordinator of OrthPhoto, presented the concept of the unique site as well as the competition initiative that has already taken place in other countries - Romania, Georgia, Serbia, Russia and Poland, and the result is one big and rich photo album.
The intention of the organizers is to include the Bulgarian selection of the photo competition in an album as well as holding an exhibition presenting the diversity and beauty of Orthodoxy in Bulgaria to a wide-range audience.
The big prize of EUR 500 went to Vesselina Velcheva for her photo "Resurrection", selected-out from the 46 participants’ photos in the competition. On behalf of the jury, photographer Penko Skoumov gave awards to these three categories: architecture, portrait and reporting, as well as four incentive awards.