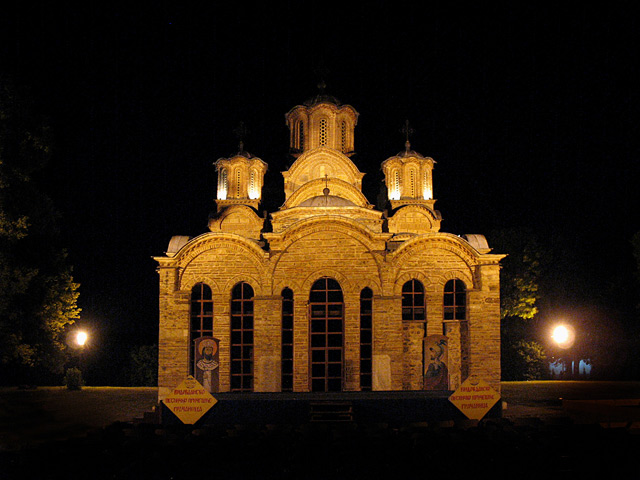 Wonderful. Thank you for the details too.

During the medieval development of the Serbian state, more than 1500 Christian churches and monasteries were built in Kosovo and Metohia alone.
One of these monuments, and the most beautiful example of European Middle Ages, is the Monastery of Gračanica, located near the scene of the famous Battle of Kosovo, which took place on June 28th, 1389. The Serbs were defeated by Turks, but this offence would be rendered into poetry of the highest class and keep them in the belief that "God doesn’t forsake forever".
Gračanica was built by Serbian King Milutin between 1315 and 1321 as the last of 42 churches he built throughout the European world, between Belgrade, Bari, Thessalonica, Constantinople and Jerusalem during the 42 years of his reign.
Many European intellectuals who passed through Gračanica agree that its external architecture and interior harmony can be compared with the famed Chartres Cathedral.
The reader will logically conclude that Chartres Cathedral was not built on foreign territory.
King Milutin didn’t build Gračanica in a secret location in the mountains of the Serbian and Littoral lands, but amidst Kosovo’s rich wheat fields, on the foundations of a destroyed early Christian 4th-century basilica, and from its cross-shaped foundation soared the vaults and cupolas hitherto unknown in the Byzantine art.
The moment you step into Gračanica, you’ll sense the mystic atmosphere of old Christian Europe!
How fascinating Christ glistens on the blueness of Milutin’s foundation!
Raising his eyes slowly up towards the centre of the cupola, we meet Christ’s severe look and his figure, like the whole "Heavenly Liturgy" surrounding him, glimmers in a gentle light. Lowering his eyes down to the solemn reduced misty light of gold and blue, among the numerous figures of Apostles and compositions, it seems as if we can hear the remote, mysterious chant of the bygone centuries.
Knowing how this Serbian king shocked the world with the treatment of his wives, it is difficult to connect this personage with this delicate refined spirit, while you hold your breath before the beauty he raised, and his passionate belief in Christ and the benefit of the good as the cosmic law.
The first wife, the Princess of Thessaly, mother of his son Constantine, he simply returned to her parents. His second marriage was to the sister of his brother Dragutin’s wife – Jelisaveta, whom he seduced while she was a nun. With her he had a daughter whom he gave a bizarre name – Empress. Soon he deserted Jelisaveta to marry, in 1284, Ana, daughter of the King of Bulgaria, George Terter. From this marriage he had got a son, Stefan Dečanski.
Then, in order to prevent him from taking Simonis, daughter of the Byzantine Emperor Andronicus the Second, as his wife, the mother-in- law of the emperor’s son Stefan, the widow of the Bulgarian Emperor Smilech, as witnesses record, pleaded to Milutin to marry herself, promising to bring the entire Bulgarian Empire as her dowry!
Milutin, however, went to Skoplje, on the bank of the Vardar River, to meet Simonis, a girl who, according to historians, was not yet nine years old and some even claim was not even six years old.
When Milutin suddenly died, Simonis entered one of Constantinople’s monasteries.
At the very entrance to the naos, the King meets us in person, holding in both hands the model of Gračanica. Near him is Simonis and from above Christ gives them his blessing while the angels from heaven place crowns on their heads. This motif was also used by Giotto. Milutin’s worthy masters painted the figures of Milutin and Simonis on the composition "The Marriage at Cana", in the presence of Christ and the Virgin, and they made him look younger, like the one who can be seen in the church in Arilje. They knew, as Milutin did, the familiar Saint Diadoch’s thought: "When seeing that we long for beauty with all our being, benevolence gives us the mark of resemblance".
Christ in Gračanica is not static. He simply rouses admiration by his unique beauty, his lively gestures, his lavish attire, his decisiveness…
The scenes of sublime beauty and refinement created by the painting technique are most evident in the scenes of the Transfiguration of Christ. Dazzling lively colours on dark blue ultramarine, the most perfect of all colors, are a rare delight for the observer , who can also experience the scenes of the Annunciation of the Virgin (dream).
On the Holy Trinity composition, Christ is depicted as an angel with spread wings sitting on the throne. Next to him, in the foreground, are two guardian angels. There is also his Heavenly Father and the Virgin Mary bent in reverence. The medieval hagiographies witness that when entering Gračanica and the other great Nemanjić foundations, the Serbs rejoiced in the figures of Apostles as if they had been alive. In the meantime, we "got stained by books being tied to life" as recorded one really great Serbian monk from Sent Andre.
Gračanica’s fresco of Saint John the Baptist is considered a masterpiece of European medieval art.
His look is really more mystical that we can endure, as if he is telling us that wisdom is separate from everything else.
Everything in Gračanica is deeply conceived.
Having lived in turbulent times when both Rome and Constantinople were bending under the blows of foreign religions, and as the son of the Roman-catholic Helen d’Anjou and Stefan the First Crowned, Milutin still felt the wound inflicted on Europe by the schism of 1045 and subsequently the fall of Constantinople on April 13th, 1204. Hence Christ of Gračanica, like King Milutin, is not only a martyr but also a soldier of his faith. The scene in which a powerful Christ, with rod in hand, expels Jewish merchants from the Temple, while the folds of his robe flatter is truly impressive. It is as if he is telling us just at that moment: "Where I go, you cannot come".

In the altar area vaulted by the iconostasis are paintings depicting the most difficult themes: Christ the Lamb on the sacrificial altar with SS John and Basil, in two lower freezes the iconologists, the fierce fighters against the enemies of Christianity, Athanasius the Great, Gregory the Theologian, John the Golden Mouth, Gregory of Nyssa. All of them were against disturbing the harmony between the words and picture, faith and act. What fantastic beauty in the one-time spiritual life of European man!
In contrast to other Nemanjićes, King Milutin wasn’t merciful even to Danilo the Second, his famous biographer and archbishop. His image is nowhere to be found in Gračanica! Only Saint Sava is worthy of painting in a pose of deep reverence, holding the golden Gospel, next to Emperor Constantine and his mother Empress Helen (Jelena).
One of the most unusual episodes in the scene of the Last Judgment is the scene of the Sea as the personification of evil. The Sea is presented as a fantastic being – half man half fantastic demon, swallowing people. On earth, the same happens: the most strange beasts and birds swallow human heads and feet. Heaven is deserved only through faith in God and through those who are closest to us, and with an upright bearing of the great cross of life.
Besides inspirations from the Holy Bible in Gračanica, as well as in other Serbian foundations from the time of Empire, two heroes are present from the popular medieval novel "Varlaam and Joasaf", celebrated both by the Roman Catholic and Orthodox churches alike. The story about the emperor’s son and the wise hermit, attributed to John Damascin, has not yet been interpreted in Serbian and European literature.
Somewhere, while they were at wars against each other, the European peoples had lost the symbolic thread of this story!
Like Milutin’s other monasteries, Gračanica has for centuries been a symbol of pride of its people, helping them to survive in hard times. Certainly, the verses by a folk poet refer to it: "How it is thank dear God!/ covered with gold/ adorned with sterling silver and pearls/ lined with the golden aspen / and on it the beams of gold/ the golden crosses and icons…"
During numerous invasions on Kosovo and Metohia since 1371, Gračanica had been many times ravaged. Milutin’s famous library with manuscripts was burned down. However, in spite of all plans to destroy it, "Man proposes, God disposes".
When you go out of the church through the small door turned towards east place your palms on the stone of Gračanica. You will feel the warmness of eternity.