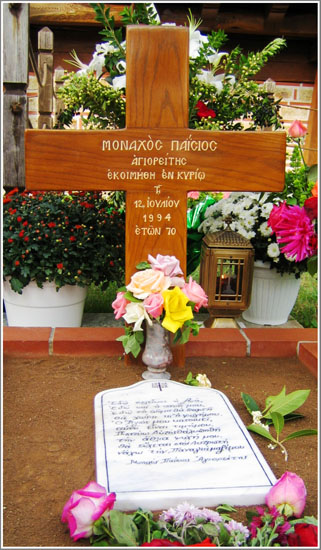 Thanks for the nice images and sounds! On July 25, 1924 the future Elder Paisios (Eznepidis) was born to pious parents in the town of Farasa, Cappadocia of Asia Minor. The family's spiritual father, the priest monk Arsenios (the now canonized St. Arsenios of Cappadocia), baptized the babe with his name, prophesying his future profession as monk. A week after the baptism (and barely a month after his birth) Arsenios was driven, along with his family, out of Asia Minor by the Turks. St. Arsenios guided his flock along their 400-mile trek to Greece. After a number of stops along the way, Arsenios' family finally ended up in the town of Konitsa in Epiros (northwestern Greece). St. Arsenios had reposed, as he had prophesied, forty days after their establishment in Greece, and he left as his spiritual heir the infant Arsenios.

The young Arsenios was wholly given over to God and spent his free time in the silence of nature, where he would pray for hours on end. Having completed his elementary education, he learned the trade of carpentry. He worked as a carpenter until his mandatory military service. He served in the Army during the dangerous days of the end of World War II. Arsenios was brave and self-sacrificing, always desiring to put his own life at risk so as to spare his brother. He was particularly concerned about his fellow soldiers who had left wives and children to serve.

Having completed his obligation to his country, Arsenios received his discharge in 1949 and greatly desired to begin his monastic life on the Holy Mountain. Before being able to settle there, however, he had to fulfil his responsibility to his family, to look after his sisters, who were as yet unmarried. Having provided for his sisters' future, he was free to begin his monastic vocation with a clean conscience. He arrived on Mt. Athos in 1950, when he learned his first lessons in the monastic way from the virtuous ascetic Fr. Kyril (the future abbot of Koutloumousiou Monastery), but was unable to stay by his side as he had hoped, and so was sent to the Monastery of Esphigmenou. He was a novice there for four years, after which he was tonsured a monk in 1954 with the name Averkios. He was a conscientious monk, finding ways to both complete his obediences (which required contact with others) and to preserve his silence, so as to progress in the art of prayer. He was always selfless in helping his brethren, unwilling to rest while others worked (though he may have already completed his own obediences), as he loved his brothers greatly and without distinction. In addition to his ascetic struggles and the common life in the monastery, he was spiritually enriched through the reading of soul-profiting books. In particular, he read the lives of the Saints, the Gerontikon,' and especially the Ascetical Homilies of St. Isaac the Syrian.

It is our great pleasure to inform you that the Third Exhibition “Orthodox Christianity on the Internet” is going to take place again in Beochin Serbia in November 2008, for St Barnabas of Hvostan and Beocin commemoration. The sposor of this event is the Municipality of Beochin and the organiser is Association “Beofoto”.
Each author cannot send more than THREE of their photographs, ONLY in dimensions of 20x30cm, provided they have been published (uploaded) on this site. Send your photos up to 15 October 2008 to the following address:

The jury made up of photography experts will award three and also praise three photos. The best photos will be published in a catalogue which will be sent to all participants of the exhibition.

We are looking forward to receiving your photos!!!